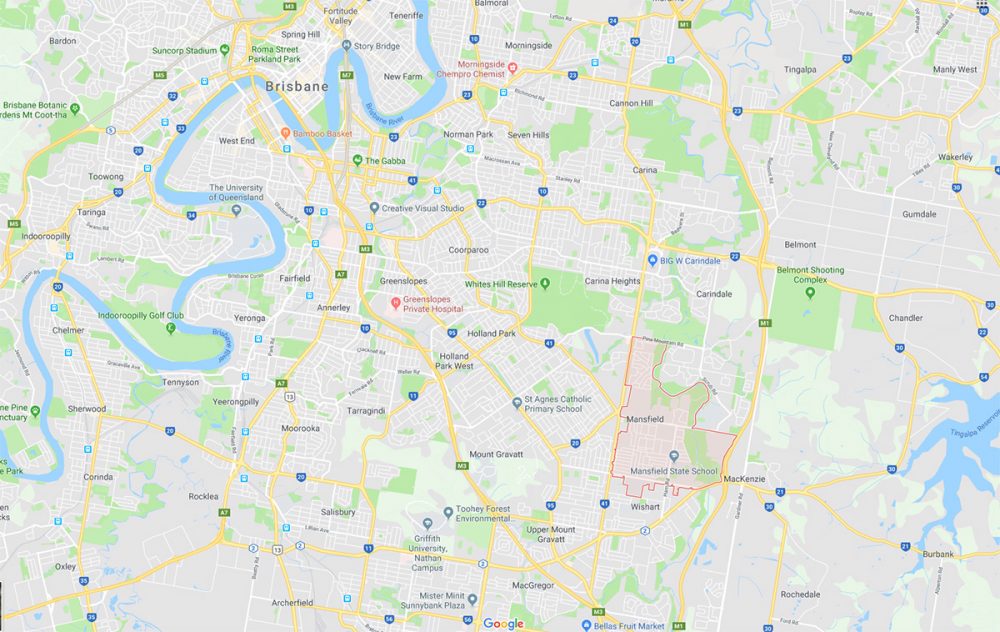 Synonymous with exceptional schools, big blocks of land, a family-friendly vibe and a convenient location, Mansfield is swiftly growing into one of the most sought-after suburbs on the Southside of Brisbane. And why wouldn’t it? The people are friendly and welcoming, both motorways are on your doorstep and the abundance of shopping centres and amenities nearby means everything you need is on your doorstep.

Having grown up on Brisbane’s Southside, Henry from The Henry Wong Team® has an in-depth knowledge and appreciation of Mansfield, QLD, 4122. He’s been selling real estate here for many years, knows the suburb inside-out and has a wide-ranging network of buyers and sellers in the area and beyond. Henry and his team have put together this Mansfield Guide to give you a bit of insight into what makes this such a popular suburb, and maybe to answer some of your questions if you’re considering moving here.

Beautifully positioned just 11-kilometres from the centre of Brisbane, Mansfield offers you an easy run up to the Sunshine Coast or down to the Gold Coast. The airport is 20-minutes up the motorway, and the attractions of Brisbane’s bayside suburbs are also within easy reach. There are also two large Westfield shopping centres a short drive away, Westfield Garden City and Westfield Carindale, while prominent Brisbane attractions like Southbank, the Gabba and Mt Cootha are close enough to enjoy.

Road: Mansfield is located adjacent to the Gateway Motorway, and wherever you live in the suburb you’ll have easy access to the Gateway. A primary attraction is that the Pacific Motorway is also only a few minutes away. This positioning is fundamental to Mansfield’s growth as a base for professionals commuting to the city every day.

Bus: Mansfield has easy access to the Southeast Busway, which stops at Upper Mount Gravatt next to the Garden City shopping complex. From there goes into the city centre on its own dedicated route, separate to normal traffic. This is a very attractive option for commuters, who can head directly into the city or hop off at one of the number of busway stations on the way.

There are bus stops within Mansfield itself that will take you to the busway. For example, Bus 180 leaves from Wecker Road and heads directly to the city along the busway, with a total travel time of around 40 minutes.

Mansfield has a very agricultural past, with some pockets of bushland still hosting original fences of the dairy cattle and sheep paddocks.

The suburb was developed in the 1960’s, initially with many government housing estates being built, but over the years these have given way to private residences

Mansfield is one of three residential suburbs named after Queensland figures, namely Sir Alan Mansfield. Sir Mansfield served as Chief Justice from 1956 to 1966 and was the Governor of Queensland.

To give you an idea of the demographics of Mansfield, here are some statistics from the last census:

In terms of culture, Mansfield can be seen as an easy-going Australian suburb where people from all backgrounds live harmoniously together. Here are some statistics to illustrate the range of cultures in the suburb:

Top Spoken Languages (other than English):

Geography and Home Style of Mansfield

Once agricultural land, Mansfield has retained large swathes of green space for the enjoyment of its residents, particularly along the eastern border of the suburb where you’ll find Bulimba Creek.

Larger block sizes are a feature too, which has encouraged many inner city dwellers to move out to where they have more room.

You’ll find a range of homes in Mansfield, from townhouses to single level homes, to split-levels and two storeys. Many properties in the area are over 30 years old, although there are also a number of modern homes that have been since then. A method of getting a basic idea of the age of a Mansfield house is to check the location of its kitchen. Older, highset homes tend to feature upstairs kitchens, while more modern two-storey homes will have kitchens downstairs.

When talking about the benefits of living in Mansfield, one of the first things that comes up is the quality of schools on offer here. Mansfield State High School and Mansfield State School are two of the most sought-after government schools in Brisbane, making this is a highly desirable catchment zone to live in. They’re supported by fantastic government schools in neighboring Wishart, as well as an impressive range of private and semi-private schools. Let’s take a look at them.

Mansfield State High School: MSHS is the jewel in the crown of fine schools on the southside of Brisbane. It attracts extremely positive reviews and has become a drawcard to the area. Conveniently located on one the corner of Broadwater and Ham Road, MSHS is a large co-ed government secondary school of 3137 students and 286 staff. A remarkably well-equipped campus, advanced facilities and a dedicated staff help to consistently rank this school in the top 10 Queensland state high schools.

Mansfield State School: Located next door to MSHS 174 Ham Road is this co-ed government primary school, which has 1196 students and 117 staff. The school provides a safe and innovative space for students to explore and be empowered, following a vision of creating curious, engaged learners; creative, critical thinkers and caring, active citizens. People moving to Mansfield will definitely want to consider this as a leading option for their children’s primary schooling.

Wishart State School: This co-ed government primary school is found on Morella Street. A strong focus on academics and a wide range of extra-curricular activities on offer have turned it onto a highly regarded education option. The well-equipped campus is technologically advanced, making use of computers in all the classrooms and electronic whiteboards. A large oval is complemented by a heated swimming pool, tennis courts and an adventure playground. There are 901 students and 105 staff at the school.

St Catherine’s Catholic Primary School: This is a parish based primary school offering a high-quality learning experience for your kids, with a focus on a spirit of outreach to the marginalised. The facilities are top-notch, the staff are passionate and dedicated, and there is a healthy focus on sports and extra-curriculars. You’ll find St Catherine’s at 388 Newnham Road in Wishart, where 505 students and 56 staff attend.

Brisbane Adventist College: A constructive and supportive Christian environment is just one attraction of this co-educational Christian college. Home to 584 students and 79 staff, it’s located at 303 Broadwater Road in Mansfield. If you’re looking for a level of personalised care for your child, this could be the answer for you.

Citipointe Christian College: A co-ed Christian college, Citipointe is found at 322 Wecker Road in Carindale. A large school of 1711 kids and 249 staff, it covers prep to year 12, offering an ongoing commitment to excellence in academics that has seen their reputation grow and grow.

Westfield Garden City: A favourite amongst Brisbane shoppers, Garden City is just a short drive from Mansfield. Located on the corner of Logan and Kessels Road in Upper Mt Gravatt, this premier shopping centre has everything you need. Grocery stores, boutique shops, restaurants, banks and other amenities, cafes, bars and cinemas all help make this one of Brisbane’s favourite centres.

Westfield Carindale: Similar in size and facilities to Garden City, Westfield Carindale is found at 1151 Creek Road. Approximately a 10-minute drive from Wishart, it has over 450 specialty stores and nearly 6000 car park spaces.

Civic Fair: Located at 280 Newnham Road, these shops include a pharmacy, Food Works, TAB, a dentist, hairdresser and much more.

Wishart Square: Next door to Civic Fair at 290 Newnham Road is Wishart Square. Here you’ll find, amongst other things, a dentist and a physio.

Metropol Shopping Centre: Located at 742 Creek Road in neighboring Mt Gravatt East, this popular shopping centre is anchored by an IGA, and has a range of takeaways, fast food outlets and amenities on offer. Just down the road on Creek Road you’ll also find an Aldi and a bunnings.

The amount of green space on offer in Mansfield is one of its best attributes. Families, dog owners and outdoor enthusiasts will love the variety of parks and outdoor amenities on offer. Here are some of them:

Broadwater Picnic Ground: Found at 20 Mansfield Place, this is a popular spot for families due to the wide spaces and plethora of amenities. There’s a barbeque area, a basketball half court, a cycle track, a fitness station, picnic area, public toilets and a car park too.

Yandina Park: Found on Wecker Road, visitors will love the climbing wall on offer here. There are also sporting fields, an activity space, a restoration site, public toilets and a car park.

Cresthaven Park: Adjacent to Banika Street sits this popular park, where there’s a basketball half court, a bikeway network, a fitness station, a playground a picnic area.

Here are some actual reviews of Mansfield from residents who live there or have lived there, as found on the Homely website.

“Great quiet little suburb. Very popular with young families trying to secure homes in the Mansfield catchment area. A bit of a hidden sleepy gem but steadily growing in popularity.”

“Absolutely loved the location and everything else. Lots of nice parks and picnic grounds. Excellent schools along with nice quiet location away from the hustle and bustle but yet still not too far from everything (including two Westfields!)”

“Been living here for 4 years now. I’ve personally never had issue with crime or feeling unsafe even when walking alone at night.”

If you’re thinking of moving to Mansfield, Brisbane, and would like to chat to someone about the suburb and what’s on offer here, get in touch with The Henry Wong Team®. You can chat with Henry directly on 0412471588.